Project: The role of ATP degrading enzymes in the life-threatening depression of breathing that accompanies reductions in brain oxygen in prematurity 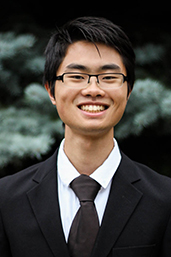 Bachelor of Science with Honors in Physiology

How was your studentship impacted by COVID-19?

Lab closures delayed my experiments, which meant that the long-awaited data collection period had to be shifted back about a month until it was safe to enter the lab again. During lab closure my focus shifted to searching through literature and analyzing the preliminary data for the phosphate assay detection protocol that I developed to ensure that there were no redundant steps and that the assay was providing data with high enough fidelity to answer the questions that we were trying to answer. This resulted in some changes to which sets of experiments were performed later on.

I think the most rewarding part of this research experience has been being able to have full autonomy over my own project. While my supervisor provided support to me throughout the process, I got to design my own pilot experiments and interpret the results from them to develop an optimized protocol. Since I was developing a novel assay, there was no guide on how to design the best protocol to detect phosphate and no 'correct' outcomes to the pilot tests which contrasted with the prescribed experiments I had done in lab courses.

How has your studentship helped you towards your career aspirations?

This studentship has helped me build upon my research experience which will better prepare me for pursuing a PhD or independent research project during and/or after my time in medical school at McMaster University. The many obstacles and setbacks during this studentship has also helped me realize that science rarely goes exactly as planned and that having the ability to overcome and deal with unexpected problems that come up is a core part of growing as a researcher.

What has the support from WCHRI and the Stollery Children's Hospital Foundation meant to you?

Growing up I was always inspired by the advances made by the great minds of the past like Newton, Watson or Gutenberg. Wanting to follow in their footsteps, I also aimed to leave something behind for the next generation. After thinking about how I could contribute, I realized that health was one of the most valuable things to give and that this was possible through advancements achieved by research. Although I don't expect to find the next 'penicillin' or pioneer new ground-breaking surgical techniques in my lifetime, I do want to devote my career to advancing healthcare and allowing others to live healthy lives. This program has given me opportunities to further these research interests and bring me closer to my goal. The research stipend has also helped lighten my financial burden, allowing me to put more time and thought towards the most important part of research—learning. As I continue to pursue my goals, I hope that one day I will be able to give the same support to aspiring researchers just as WCHRI and the Stollery Children's Hospital Foundation have given me.

The brain depends on a constant supply of oxygen to meet its energy needs. If this supply fails for even a few minutes, permanent brain damage or death can result. Some infants born prematurely are at risk because they suffer from apnea of prematurity, a condition where breathing slows or stops (apnea) for short periods and oxygen levels fall. Unstable breathing reflects that the brain circuits that produce breathing are immature. Reductions in oxygen levels during these periods of apnea trigger an adaptive increase in breathing. However, if this increase does not immediately restore oxygen levels, the brain becomes hypoxic and our research in animal models has shown that the neurochemical adenosine triphosphate (ATP) is released in the respiratory centers of the brain.

While this ATP initially helps maintain the adaptive increase in breathing, ATP is rapidly degraded to adenosine, which depresses breathing. The net result is that the initial hypoxia-induced increase in ventilation is followed by a secondary depression that is potentially fatal in premature infants who suffer from apnea of prematurity. In many infants, the respiratory stimulant caffeine is used to reduce these apneas and respiratory depression. However, approximately 20% of infants do not respond to caffeine so alternative treatments are required.

The interaction between ATP excitation and adenosine inhibition of breathing is emerging as a key determinant of the magnitude of the hypoxic depression. Multiple factors determine the balance between the actions of ATP and adenosine. Key among these is a family of enzymes called ectonucleotidases that remove phosphates from ATP and degrade it to adenosine diphosphate (ADP), adenosine monophosphate (AMP) and adenosine. There are four main subtypes of ectonucleotidases in the brain and each has differential substrate preferences and products (i.e., some degrade ATP to ADP, others degrade ATP all the way to adenosine). Thus, during hypoxia when ATP is released in the respiratory regions of the brain, the complement and concentration of enzymes in that region will determine the rate at which ATP breaks down and type of ATP breakdown products that accumulate. Enzymes that preferentially produce ADP foster excitation of breathing because ADP is like ATP and stimulates breathing. Enzymes that produce adenosine will promote respiratory depression.

The aim of this proposal is to determine the activities of the different ATP-degrading enzymes in the respiratory regions of the brain compared to other brain regions during development. This information is necessary to guide the development of approaches that will allow manipulation of ATP degrading enzymes in respiratory regions of the brain to reduce the depressant effects of hypoxia on breathing in newborns.