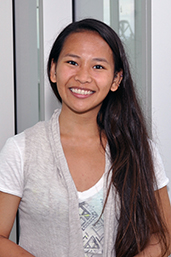 Bachelor of Science with Honors in Neuroscience

The best part has been learning about the techniques that will be used in the project. I have so far learned how to culture and grow cancer cells, introduce genetic material into cells and how to use a cell irradiation machine. I have also learned how to image cells and tissues on the confocal laser microscope located in the Department of Medical Genetics.

How has your studentship helped you towards your career aspirations?

This studentship has allowed me to explore a career in research and has given me a more rounded experience that I know will help me in the future regardless if I pursue research or other fields.

Diffuse intrinsic pontine glioma (DIPG) tumours—located in the middle of children's brainstems—are always fatal despite therapy improvements. During brain development, the Dlx2 gene is a transcription factor that regulates gene activity and allows undetermined brain cells to choose between becoming an inhibitory neuron that dampens brain cell communications or a support cell, an oligodendrocyte. The inhibitory neuron decreases activating signals to the brain while oligodendrocytes—cells that produce myelin, a fatty substance used to insulate nerve cell fibres—are responsible for increased speed of the neuronal signals. With the presence of DLX2, undetermined cells are more likely to become inhibitory neurons instead of oligodendrocytes. This is relevant to DIPG since the tumour is thought to originate from oligodendrocytes, and as such, suppression of oligodendrocyte development by DLX2 may suppress the tumour cells as well. For this project, we are replicating the tests that have been seen with DIPG mouse models, but with the use of human DIPG cell lines. Appearance of specific proteins and the expression level of genes that were missing or decreased in DIPG cells lines, and the cell’s spread and growth will also be determined after Dlx2 has been introduced and compared to cell lines without Dlx2 introduction. We hypothesize that there will be decreased spread and growth of the DIPG cell lines as well as increased levels of missing genes and proteins when Dlx2 is introduced. With this project, we hope to provide information on DIPG tumours that may potentially contribute to future therapies and better prognosis for the pediatric patients.