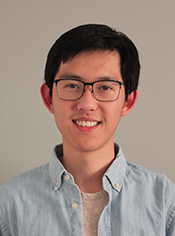 Corneal dystrophies arise from defects in the endothelial cells of the eye's cornea layer, leading to vision impairment. This project investigates congenital hereditary endothelial disease (CHED), a genetic disease affecting children, which can be caused by mutations in the gene SLC4A11. The proper functioning of this gene is essential to corneal health. Different mutations in the SLC4A11 gene have been identified to affect the cell's functions in water transport and/or the proper attachment of corneal cells, both of which can lead to corneal dystrophies. SLC4A11 is hypothesized to act as a peroxide transporter. Thus, one potential way in which SLC4A11 mutations can cause corneal dystrophies is if this peroxide transporter function is impeded, which would prevent the cell from dealing with oxidative stressors, leading to the death of the cell. The death of endothelial cells may result in detachment from the other layers of the cornea, eventually leading to corneal dystrophy and blindness. The objective of this project is to determine whether SLC4A11 serves as a peroxide transporter. We will determine this by comparing the peroxide transport activity between cells with or without SLC4A11 expression. If SLC4A11 acts as a peroxide transporter, we will examine different SLC4A11 mutations to identify the specific mutations that affect this transport function. This information is critical to developing strategies to treat CHED patients in a personalized way.

This year, I wanted to participate in research in a different field from the research I had done in the past. Casey's Lab specializes in membrane transport, which was a topic we had only just begun discussing in my undergraduate biology lectures. I saw this research opportunity as the chance to really delve into membrane transport, a topic I was relatively unfamiliar with, but wanted to learn more about. I also wanted to develop new lab skills by experiencing research first hand in a different lab environment, which would also allow me to gain novel perspectives as to what research looks like on a daily basis.

After finishing my undergraduate degree, I plan on furthering my education to pursue a career in healthcare and research. My summer studentship this year has been extremely rewarding, in that I’ve been able to directly partake in the basic research that will ultimately contribute towards improving existing treatments for corneal dystrophies.

This summer studentship has been very productive; working in a field of research that I was previously unfamiliar with has helped to broaden my experience in research immensely. Specifically, I’ve learned fundamental molecular biology techniques that I will carry forward both into my future undergraduate courses, and any other future research experiences. It has been extremely rewarding to work on the basic science that provides the foundation for a more personalized approach towards treating corneal diseases. This has strengthened my motivation to ultimately enter a field involving both research and healthcare.