The Heart of a Woman 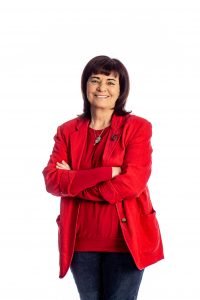 Ten years ago, as part of a qualitative study she was conducting, nursing professor, associate dean of research and Cavarzan Chair in Mature Women’s Health Research Colleen Norris, ’78 Dip(Nu), ’82 BScN, ’92 MN, ’02 PhD, asked women what it felt like to be given a cardiovascular diagnosis by a health-care professional. The answer was not what she was expecting, and it was an a-ha moment for her.

“‘It’s embarrassing. It’s all my fault.’ This is what one woman told me,” Norris says.

“I thought to myself, ‘Of course this is not your fault,’ ” she says. “But this is how women see it. We blame ourselves and then we hide it. This is how we fall into our gender roles.”

Ever since then, Norris’ research agenda has been clear — to raise awareness of women’s heart health. She says it’s easy to understand why cardiovascular health isn’t front of mind for many women.

“It’s not because we don’t care about our health; it’s because we don’t make ourselves a priority,” says Norris, who is a member of the Women and Children’s Health Research Institute (WCHRI). “Instead of talking to someone about it, we keep it to ourselves. Rather than focusing on ourselves for a few hours, we’ll be doing everything for everybody else.”

The statistics speak for themselves. Women comprise 51 per cent of the Canadian population, yet evidence-based cardiovascular research aimed at just females is almost non-existent, explains Norris. And treatment and therapies designed specifically for women are missing from the health-care system.