Reducing children’s pain one grant at a time 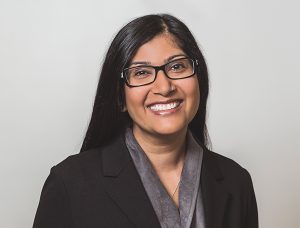 That’s the one researcher Samina Ali is aiming to soothe in Canadian hospitals.

Ali had been practicing emergency pediatric medicine when one day she realized she wasn’t able to hear a colleague over the cries of children in pain. It was then she decided to begin focusing on researching children’s pain management in hospital emergency departments.

Ali, who balances her clinical practice at the Stollery Children’s Hospital with teaching and research at the University of Alberta, started with small WCHRI trainee grants and modest start-up funds, which her team used to determine the priorities and gaps in pediatric pain research. As the years progressed, she moved on to more in-depth studies and gained national recognition for her research.

She now leads Western Canada’s hub for Solutions for Kids in Pain, or SKIP, a knowledge mobilization network funded by the National Network of Centres for Excellence and the Stollery Children’s Hospital Foundation through WCHRI.

Ali notes that children are less likely to receive pain medication than adults in emergency rooms for the same injuries. In Canada, few drugs given to children, including painkillers, have been tested for children’s use. Doctors guess at appropriate doses and a lack of pain medicine-specific training and protocols represent barriers for other health care providers dispensing pain medication to children.

During one of her studies at the Stollery Children’s Hospital, she found that on average it took two hours for children to receive pain medication while waiting in the emergency room. That study supported and led to protocol changes, leading to an improved average wait time of 17 minutes.

These are concerns Ali and SKIP are planning to address in hospitals throughout Canada.

Currently, Ali is utilizing funding to better understand parental concerns about opioid medications in light of the current opioid crisis in Alberta.

“We are studying their responsible use in children and what the actual potential for misuse is after we prescribe it.”

“There are two clinical trials, one with hydromorphone and one without,” says Ali. “We’re asking parents which one they’re comfortable participating in, and then the really interesting part is, we ask them why. We’re learning what makes them hesitant to participate in an opioid trial so that we can better understand their fears. That way, if this study does show us that hydromorphone is the best tool, we’ll have a better understanding of what to explain to parents to help them feel comfortable with that plan.”

Since 2010, Ali has had multiple studies funded by the Stollery Children’s Hospital Foundation through WCHRI that have helped change how children’s pain is managed in hospitals. Ali credits her initial trainee grants with planting the seed for sweeping changes.

“I am truly grateful for what the Stollery Children’s Hospital Foundation and WCHRI have provided me. They gave me my research legs. These small grants allowed me to build up my credibility which led to the work I’m doing now, which also wouldn’t be possible without their support.”