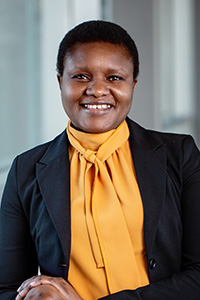 The health of a mother during her pregnancy is vital for fetal health and for survival of the baby.

Group B Streptococcus (GBS) are bacteria that are commonly found in the intestine, vagina, and rectum in about 25 per cent of healthy pregnant women. Most women who are carriers of the bacteria have no immunity against it, making them susceptible to GBS infection—the leading cause of stillbirths, neonatal sepsis and meningitis—which can be passed to unborn babies during pregnancy or during the process of giving birth.

Treatment with antibiotics during pregnancy or just before giving birth is a common practice for preventing GBS infections; however, the antibiotics are not fully protective and are also associated with other serious health problems.

Although no effective vaccine for GBS currently exists, Munyaka is looking to make a crucial contribution to that with her research project. She’ll examine a bacteria called Prevotella and evaluate its potential to promote an immune response to GBS infection in pregnant mothers.

Munyaka’s research will help unravel how vaccination and use of bacteria like Prevotella can provide strong maternal and newborn protection against GBS.

“I feel so honoured and lucky to receive this support and that the importance of my research was recognized and acknowledged,” says Munyaka, who hopes to one day establish a research program focused on the investigation of early-life exposures that influence the health of children.

Munyaka is supervised by Benjamin Willing. Her fellowship has been funded by generous support of the Stollery Children’s Hospital Foundation through the Women and Children’s Health Research Institute.