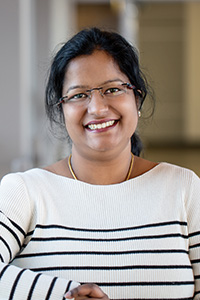 The cells in our body are routinely exposed to different types of stress and rely on intricate mechanisms to maintain their genetic stability. Prolonged stressful conditions—such as exposure to toxins or infections—can cause DNA damage, or even completely change the cell’s metabolism.

Ataxia telangiectasia, a disorder beginning in early childhood that is characterized by progressive difficulty with coordinating movements, is caused by mutations in the ATM gene, which provides instructions for making a protein that plays an important role in the normal development of several systems in the body—like the nervous and immune systems.

However, there is emerging evidence that one of the underlying causes of neurodegenerative diseases, like ataxia telangiectasia, relates to the machinery that controls stress responses in the brain.

Garg and collaborators are investigating a protein called DDX1 whose role is to change the structure of RNA, which affects the amount and types of proteins found in a cell. Previous research discovered that the DDX1 protein interacts with the ATM protein and helps in stress recovery, which prevents neurodegeneration.

Using cells taken from the skin of children with ataxia telangiectasia, Garg will spend the next two years gaining insight into the roles of ATM and DDX1 in the cell’s ability to handle stress. Once armed with that information, Garg hopes to learn how these proteins protect nerve cells from stress-induced neurodegeneration, like that seen in ataxia telangiectasia.

“This fellowship has provided me a wonderful opportunity to develop my skills as an independent researcher,” says Garg.

Garg is supervised by Roseline Godbout. Her fellowship has been funded by the generous support of the Stollery Children’s Hospital Foundation through the Women and Children’s Health Research Institute.